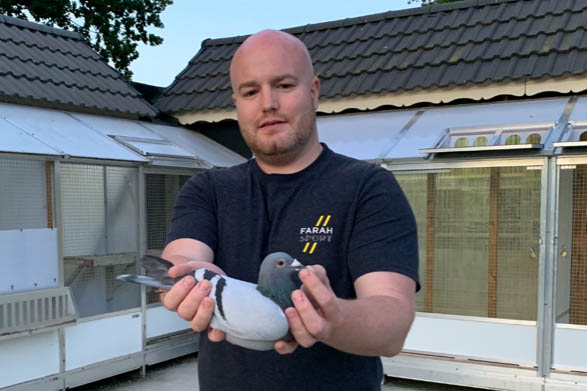 While many were concerned about the wind gusts that had been forecast our race controller Carl Upsall ensured the conveyor and others ‘to get them away its going to drop’ and after a one day hold over at 08:00hrs on Sunday 5th July conveyors Darren and Merv had the 1915 competing birds in the NRCC Arbroath race out into a fresh west south west wind and wind or no wind the birds seemed to make good use of it and were doing over 50mph with 147 members verified from some 156 that entered.

As reported previously the provisional winner from Arbroath was Tom Burkill and with a less than a yard separating him and club mate David Hicks it wasn’t until the clocks had been struck  off and any variations checked that we could confirm the actual result, yes it was that tight.

With every thing checked out Tom was confirmed the winner by race secretary Ian Bellamy. Tom’s blue hen was doing 1593.232ypm while Davids pigeon was close behind on 1592.523ypm.

Thirty three year old Tom is a third generation fancier that hails from Barnsley had enjoyed pigeons with is father up to abut the age of 12 when Toms father David gave up the sport to enable Tom to get a good education and this has certainly paid off as Tom is now the managing director of ‘Anglian Chemicals’ which manufacture all things cleaning and janitorial.

When attending the pigeon club as a boy in Barnsley there was also another young lad going along with his father, that was non other than Ritchie Turner so In 2017 when Tom returned to the sport it was no surprise that he contacted his childhood friend Ritchie for some pigeons, Tom travelled up to Ritchies where he left with some quality birds and yes you have got it, it is from these birds that Tom’s Arbroath winner is bred being from a son of Ritchies Midland National winner ‘Wicket’while paired to Ritchies daughter of the ‘Olympiade 003’ hen of Leo Hermans.

After his first season with youngsters in 2017 later came a house move to Mattishall where the birds are housed and Tom lives with wife Charlotte and their two year old son.

The Arbroath winner a yearling hen was one of the first youngsters to be bred at their new address. Tom told me how this hen never nearly made training as a youngster. ‘I went in the loft and she had found her way out of the box onto the floor and managed to get herself scalped very bad and I thought I would have to do the right thing but speaking on the phone to Jimmy Dutton he said no don’t, move her over to the young bird loft and she will grow new feathers once the wound had healed. (tom showed me a photo of this hen as a youngster with her injury and it was bad!) so the bird was moved over and as Jimmy said the new feathers grew and she raced the young bird programme finishing 17th section NRCC young bird Berwick.

This year birds were paired early January and were allowed to rear youngsters but not their own as Tom was saying ‘I have too many stock birds around me at the moment so in order that I can assess them I floated their eggs under the racers in order to breed as many youngsters from them as possible. When the youngsters were weaned the birds were parted and again repaired for training in readiness for the first race however due to the Covid situation and the postponing of the season Tom repaired the birds again in May and trained them while they were driving up to a distance of 25 miles.

Once in to the first race the birds are only ‘loft flown’ and both cocks and hens will be exercised.

Tom flys with the Norfolk North Road Federation but as the federation had decided to go short one week Tom approached the Peterborough and District Federation to see if he could send surplus in order to get some more distance into them before the Arbroath race and wishes to thanks Carl Upsall and Ian Dye for facilitating it.

Both cocks and hens are raced by Tom and as rule he likes both sexes to have contact prior to the race and will first place the bowls in the cocks boxes, when the cocks are calling in the bowl he then allows the hens in, as soon as they are in the boxes with the cocks they are fastened in their boxes and allowed 10 to fifteen minutes together and basket for marking, how ever this was not so for Arbroath as marking starts early at Norwich and time didn’t allow so only the yearlings saw their partners while the two year olds were basketed straight their loft and taken to the marking station.

I asked Tom would he be retiring the young hen he swiftly relied ‘no I want to see what she will do at Dunbar and hopefully Perth next year’. Wrapping the conversation up Tom wishes to extend his gratitude to his father David who usually helps out but due to social distancing has had to refrain from being with Tom, amongst others are Les Green, Jimmy Dutton and Chris Vasey all who have offered advice and had an ear bending from Tom

All I can add is to watch this space as this is one forward thinking, determined young fancier that has a passion to succeed!

I would be most grateful if the section winners could send me a picture of themselves along with some information on there Arbroath pigeon and how thier day was, this can be sent to info@nrcc.org.uk

Good Luck for this week end