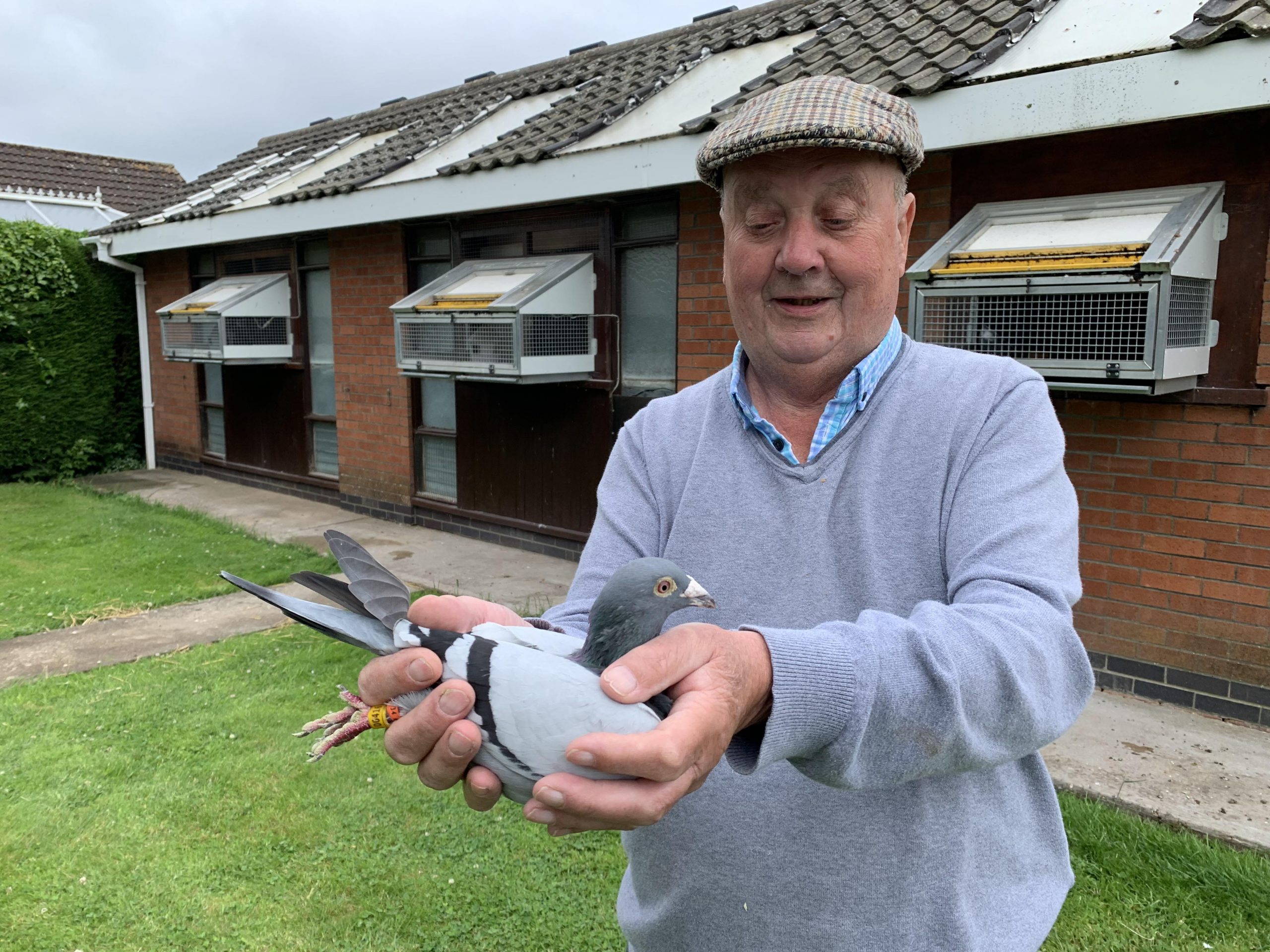 While other organisations have been prevented from going ahead with their usual Blue Riband event the NRCC were and some 120 members entered 646 birds last Wednesday for their trip to Lerwick in the Shetlands.

The birds were liberated at 08:15hrs into a north easterly wind Ian the race secretary reports ‘ The first verification came in was from Committee man Dave Brackenbury of Boston in Section C. His pigeon, a two year old cock bird went top of the provisional list and remained there throughout the day. The next two birds on the list were from Sections F and B and belonged to Maurice Bishop & Son of March and John Norris of Grantham’.

Dave would go on to be the 105th winner of our Blue Riband event and for doing so will lift the prestigious King George V trophy for his triumph.

Dave clocked his winner at 17:38hrs Saturday tea time, Dave was quick in verifying and lead the field through the evening up until the close of the race on the first day and could sleep easy knowing that he wasn’t going to get caught by the longer flyers as he slept.

Previously Dave has been second open twice in the NRCC’s Kings Cup race from Lerwick, he won the clubs young bird classic from Berwick against 2500 pigeons and was 1st Open from Fraserburgh in the NRCC against 5000 plus pigeons, but this is the ‘highlight of my life in pigeons and Ive had them since the age of 13’ As Dave rightly says ‘to get your name on the Kings Cup from Lerwick is the pinnacle in pigeon sport!’

His winner is a two year old cock bird flown on the natural system and was paired up on 12th March. None of the race birds are allowed to rear a youngster but the pairs were pot egged and were allowed to run their eggs and were basketed for the first race from Driffield (73 miles) and on to Whitby (108 miles), Seaham Harbour (141 miles) after which the birds were separated and Dave had every intention of flying them on the round-about system but living on his own after basketing and then driving to train the birds, coming home separating the cocks and hens just proved too time consuming so after the last federation race from Whitley Bay(156 miles) left the birds together as living on his own, the time taking to basket the birds, drive them training getting back, separating the cocks and hens was just proving to time consuming so allowed the birds together where he proceeded with racing the birds on the natural system.

‘Priory JDA’ was basketed for Perth (276 miles) with the NRCC and finished a respectable 20th Open. After his trip to Perth he was given complete rest for two weeks flying around the loft.

And in preparation for Lerwick, Dave says ‘I spent a lot of time among the birds for the next two weeks observing them around the loft. In the mornings I’d let them out at 7am for exercise and call them in for a light feed and take them train every day with the car on the return the traps would be left open and they’d be left to their own devices leaving them on ‘open hole’ the birds would make their way out of the loft and take their exercise where upon afterwards they would be given their feed around 4pm and shut up’.

The mixture given to the birds is made up of Versele Laga Superstar and Gerry Plus with up to 50% Tic Beans added to this will they will be given some peanuts which Dave freely admits he ’s not sure who eats more him or the birds!

‘Priory ADJ’ was basketed for Lerwick sitting 14 day eggs and although Dave prefers them sitting a little less it most definitely worked for him and his new star, who he says ‘will be going to Thurso in 2022!’ Dave also clocked a second entry at four minutes past  six from his entry of seven birds

The sire of the winning pigeon was as bred by Andy Smith from Northampton. Dave attended Andy’s sale at Blackpool and purchased two hens, at the close of the sale there were four birds that hadn’t sold and Dave asked the auctioneer ‘what he’d take for a large framed cock bird,’ the auctioneer replied ‘£20’ Dave always liking a bargain handed over the payment and this cock was paired on to a daughter of his friend Terry Wintertons ‘Lady Margeret’ winner of 26th, 17th and 2nd Open Lerwick when she was coupled to Terrys Champion ‘Pure Pleasure a winner of 16x 1st prizes. Terry himself also if lying provisional 7th open.

Not half an hour later after Dave clocked the winner he also clocked a second bird from Lerwick and while verifying on Sunday morning his club chairman handed him his local club result where he also finished 1st from Whitby, all in all a good weekends flying for him.

As Ian says ‘this years race was a very open race as proved by the first three birds on the provisional result coming from three different Sections. The next two birds on the list were from Sections F and B and belonged to Maurice Bishop & Son of March and John Norris of Grantham’.

In closing while the day belongs to Dave Brackenbury we have to mention the brilliant performance from George Chalkley & Son in Section H of London who timed their bird at 20.05 to record 9th provisional with this gallant bird flying almost 600 miles on the day.

Full result can be seen here

A full race report will be compelled by Stuart Lunn