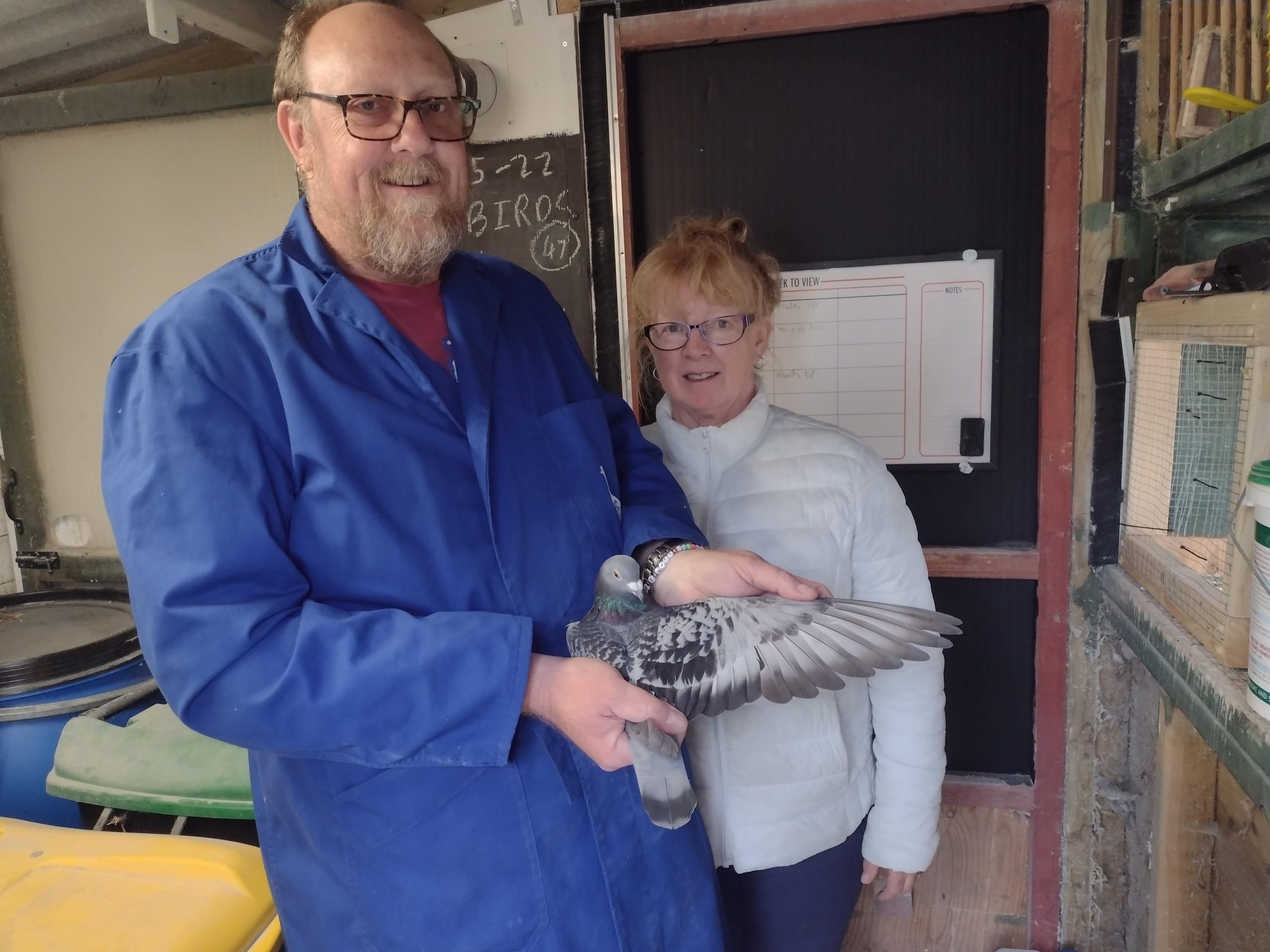 What a superb Dunbar race to kick off the North Road Championship Clubs’ 2022 season.
With full cloud cover at Dunbar when our convoyers Darren and Merv woke the chance for an early liberation did not seem likely, however by 9.00 the clouds broke and the liberation was on.
At 9 o’clock the birds the 2000 plus convoy was on their way intp a strong West South West wind and the wait began.
The first to verify was Martin Sharpe of Hogsthorpe at 13:20 who obviously went top of the provisional list where he was to stay throughout the day.
Once the verifications started they came in to our verification service thick and fast where over the course of the day 98% of the members had verified.
The top three on the provisional result were very close to each other so it was a wait until the respective fanciers had their clock read at their clock station. It was not until around 6.30 in the evening that I found in fact Mr & Mrs Darren Kingswood had won the race with a velocity of 1506 YPM. Second place goes to Martin Sharpe on 1502 YPM and Mr & Mrs P Dayton on 1499 YPM taking third

Sec C & First Open – Mr & Mrs D Kingswood – Huttoft
Sitting in second open position for a good part of the afternoon was the Huttoft loft of Mr and Mrs Kingswood, this would soon change when Martin called myself and Ian has an error was showing on Martins distance’s.
I called Daren to arrange the verification and asked him how he felt when he realised that he was in actual fact first Open, of course he was over the moon, this is now Huttoft loft’s third NRCC win as in 2013,14 they won the clubs opening race from Berwick back to back and now in 2022 they open their NRCC account with ‘1st Open Dunbar’.

Darren told me ‘when the call was received saying the birds were up he checked their wind sock and it was gently blowing west south west.
The club birds had returned quickly from our federation race from Great Driffield so with a quick phone call to his dad, between them they decided that anything under 4 1/2 hours would be a good bird today from Dunbar.
We were waiting outside in the garden and noticed that the windsock had turned due east this was around 12:30 I didn’t think this would affect our birds as the wind often varies by the coast.
I was watching for the birds and at 13:17 there were 2 birds coming straight towards the loft on a perfect line one of them shut up and dropped on to the loft while the other did another couple of laps of the garden before clearing off South.
When clocked Jackie verified while waited in the garden watching for more arrivals.

Later I went up to the house and would call Martin Sharpe to congratulate him, but saw Martin had been trying to call me, on making the call Martin informed Darren that he would be the winner as there was an error in the distances, as Martin had moved loft location and his distances were showing incorrect and that Darren and Jackie were in actual fact the winners, hence when Darren later viewed the website there he and Jackie were ‘top of the pile’ there only thing now was would any of the Norwich birds or those further down catch them.
Our morning started with a phone call saying the birds were up I checked our windsock and it was gently blowing west south west.
The birds returned quickly from our fed race and a quick phone call to my dad, we decided that anything under 4 1/2 hours would be a good bird today. I was outside in the garden and noticed that the windsock had turned due east this was around 12:30 I didn’t think this would affect our birds.
At 13:17 there were two birds coming straight towards the loft on a perfect line one of them shut up and dropped on to the loft while the other did another couple of laps of the garden before clearing off South.
Our winning bird is a yearling hen racing on roundabout, she had 2 races as a young bird and then went ‘AWOL’ for 4 weeks after coming home from the first young bird race she was raced again and did the same again but only for around ten days. On checking how she was bred I thought I would give her a chance as I had some similar bred that had topped the federation for me, she is of mixed parentage containing Van Reet, Marcellis and Lambrecht lines, so I suppose she’ of sprint origin!’
The birds are loft flown and. During the week if time allows, they will be given two tosses with the car, as a rule when basketing the birds are not run together, the cock get the bowls and the hens go from the perch to the basket, later in the season then sometimes I will show them prior to a race, it all depends on how they are coming.
The Kingswood’s entered twenty birds in the race and had 100% returns. 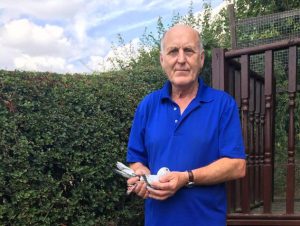 No introduction requires for this NRCC Champ; Roger Hallsworth, Kings Cup winner, Thurso winner, NRCC Young Bird winner, the list goes on for this fancier from Selston on the Notts Derby boarder.
Unfortunately, I couldn’t get hold of Roger to make these notes but I am sure we will hear more of him as the season progresses, after all I hear he has topped the Nottingham North Road Federation twice this season. His section winner is flown on the round-about system and has already a top 100 position in the open in the NRCC Thurso race.

Sec B – S Betts & Son – Spalding.
Shane will be buying flowers for wife Liz as she notches up another section win for him as Shane works away from home all week while Liz tends the to the birds. His section winner is a two year old cock bird raced on the Widowhood System, both parents are bred down from his direct Eric Cuelerman birds. The sire won twice on the north road including Berwick as well as several other positions while the mother only raced as a youngster but attained a first and a second prize.
Shane was a Friday night chaperone on our coach trip to Belgium but not many had his staying power, since Covid out a stop to these jaunts I understand Shane is also working on the ‘wow factor’ in his garden! Well done Shane and Joe says ‘hello to the two people he was talking to in that bar!

Sec E – GV & W Britton – Newborough.
We enjoyed a Great day’s racing (coupled with repairing a Barn roof) & with all our birds home bar one on the day, our winning Winning 1st Section E
is a Blue Cheq 2019 Latebred Cock. He had no training in its year of birth & as a Yearling with all the disruption that Covid brought to the season,
He is from the result of a first cross of a sprint pigeon direct from Eric Ceuleman that we obtained from Tony Woolsey when he packed up racing, crossed with a very good old long distance stock hen that came from MNFC winner Barry Thirtle but was bred just like Barry’s MNFC winner by Perry Brothers of Kings Lynn from their 2nd Open NRCC Lerwick winner it & all our Yearlings were just sent to one short Peterborough Fed Race to gain an education of what a Transporter looked like!
What was so pleasing on Saturday’s race was that he was 15 mins in front of our next bird & was 17 mins and 45 yards in front of the next placed bird belonging to Richard Waller in the Section……something that is not often achieved at a 250-mile race with with velocitys in the 1400’s!
Thanks must go to Darren & Merv & all our Weather contacts up & down the Country….we now look forward to NRCC Perth in two week’s time! 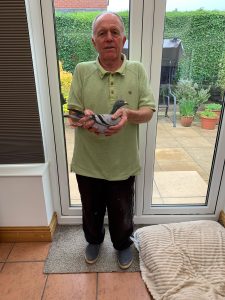 A great race for ex plumber Bob Frew, it was a close fight for section F between Bob, who is from Holt and the Woods and Batch duo from Lakenham but Bobs ‘on form double fed topping’ blue hen surely delivered this week.
Bob told me ‘I’ve never had the same pigeon top the fed two weeks running, so to have my yearling blue hen manage to win F section by the smallest of margins from the ace flyer Andy Woods Bob went on ‘she hit the trap and ran in and achieve the second consecutive fed win makes this race one of my most memorable, I reckon if she had walked along the board she may have been second!’
Her sire is direct from good friend and former race partner Nick Barran’s “good pair” and what a fabulous pair of producers they are, crossed with a hen from my best pair of Mick Betts bloodlines, they are the base of my team and have now added to their list of winners produced.
I must say a big thank you to all the marking committee at local level and above for their tireless work.

Bob Frew, ex plumber Bob timed the winner after 5 hours and 40 minutes for the 277 mile flight, this really is a special pigeon. A yearling blue hen, she topped the fed last weekend from Whitby and was still in race mode this week. Bob told when me she hit the trap and ran in for a velocity of 1434.139 ypm 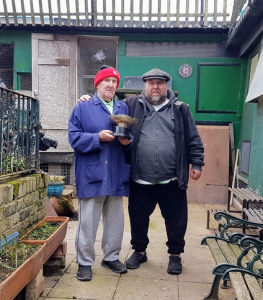 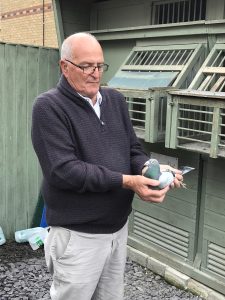 Norman races with his son, Keith, they have been a member of the club since 2001 and in that time have won the section from every race point
By today’s standards their loft is ‘tiny’ 10 feet by six feet and that houses, everything they race both old birds and young birds.
Speaking to Norman he said ‘it was a great day, sadly I could not be there to see the bird arrive as he had a show booked in London, so son name was taking care of the arrivals.
The bird we timed was a blue two-year-old cock flown on double widowhood, it was fifth race of the season, last week he went to Whetherby, that was 170 miles for us and then he was into Dunbar 315 miles.
Last season when the BICC had some north road races this cock was 2nd section 20th Section Hexham and 5th Section when there were only 45 on the day from Elgin with the BICC.

Up to the race we feed the birds on Versele Lage Gerry and at the end of the week we make the mix a little heavier with Super Widowhood and a small spoon of hemp.
Prior to basketing we don’t normally show the hens but on this occasion, they were allowed together, which is not that straight forward as the youngsters are also kept in this tiny loft!

In closing on the whole great returns were confirmed in all areas. The only black mark on the event was that there were quite a few members who could not send to the race because the were in the dreaded restriction zones due to bird flu. Let’s hope these restrictions are soon lifted so that these fanciers can salvage something from the 2022 season.
Congratulations to Darren and wife Jackie on his win from Dunbar and a thank you to all the fanciers who participated in the race and I hope you will again enter your birds in the North Road Championship Clubs’ next race which is from Perth on 28th May 2022.
It is still not too late to join this great Club, application forms can be downloaded from the website www.nrcc.org.uk or by contacting Ray or Ian, the phone numbers are at the bottom of this report.