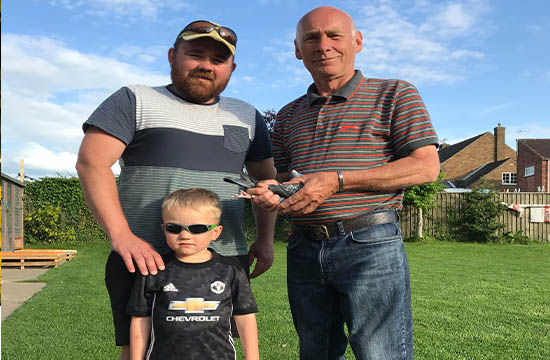 This year’s Lerwick race has been provisionally won in the sixth fastest time in the North Road Championship Club’s 118-year history, and the coveted King’s Cup will be in the possession of Louth fanciers Richard Mamwell and grandson Tom for the next 12 months.
It is their second open win with the NRCC this season, having finished top of the result from Perth earlier in the year, and it makes a total of four open wins, plus many section successes, for 67-year-old Richard, a good worker for the sport and one of the most likeable members.
Richard had always claimed that he was not a distance fancier, maintaining that their birds competed better over the short to middle distances, and says that both he and Tom were amazed to win, but absolutely delighted.
“I know that we are short flyers, but this was a very good pigeon because none of the other short flyers in Lincolnshire were near him, and other leading pigeons were in a variety of sections. He must have come on his own down the coast – a cracking pigeon.”
The winner is a three-year-old blue chequer celibate cock bird, which has always been a consistent performer and was the one of their entry of six which Richard most fancied.
“I was very pleased with the condition of the birds,” he said. “And I thought this one could give a good performance. We were surprised to win, but it was no surprise to me that this one came first. All of our entries had been to Dunbar and Perth with the NRCC, but had missed Fraserburgh. I don’t think Lerwick birds want over-working. They had a race from Alnwick with the Peterborough Fed before going to Lerwick.
“I think another boost to their preparation was that I was able to leave these cock birds out for two or three hours every day, and they enjoyed flying at their leisure in the sun and wind. I took this risk despite the threat of the peregrines on Louth church. I reasoned that, since all five of the youngsters hatched to the peregrines had died, the parents would not be as busy as usual seeking food, and this gamble worked. The birds really enjoyed this spell of freedom and they were in great condition.
“I also changed their food a little, introducing tic beans for additional protein, and a bigger percentage of maize.”
Parents of the bird responsible for the Mamwell name being inscribed alongside all the Lerwick greats on the treasured King’s Cup were bought from the Premier Stud’s sale in Blackpool in January 2015.
They cost £100 each as youngsters, and Richard reckons that was £200 well spent.
The father is a Geerinckx and the mother a De-Rauw-Sablon.
Richard and Tom had a second bird which should feature well in the final result. Again it was a celibate cock, of David Beswick Cooreman lines. They sent six, had four on the day, one next day and the other was still absent on Sunday afternoon.
Comments by race secretary, Ian Bellamy, were as follows:

“We were overdue a fast Lerwick race and, indeed, we got one this year.
“Five sections occupied the first six positions in the provisional result with 91 verifications on the day from all sections and a further 16 on the second day up to midday, giving a total of 107 members verifying out of 121 competing members.
“Congratulations, of course, to the race winners, that being Richard Mamwell and Grandson of Louth, and a well done to all the members who verified pigeons.
“Nuttall & Son came very close again, winning Section A and being third in the provisional open result. Perhaps they may do it at Thurso?
“A total of 123 members sent 652 birds ( 2 members did not send despite making entries).”
Provisional section winners are:

Section A – Nuttall and Son.
Section B – J Norris.
Section C – R Mamwell & Grandson.
Section E – G V & W Britton.
Section F – S Rudledge.
Section H – J K Hore,
Section I – R Olive.
There will, in due course, be the usual intriguing stories to tell from the section winners in this Lerwick race, such as that of Section E winners, Graham and Michael Britton, who sent 40 birds and timed 35, contrasting that with Ronnie Reason who sent only one and was second in Section I.
For the record the fastest ever NRCC Lerwick race was in 2000 when it was won by Mr and Mrs Graeme Parrinder with a velocity of 2104 yards per minute. Where were they based? Louth!

Photo is of Richard Mamwell, and his grandson Tom, and Tom’s son, four-year-old Brodie, with their Lerwick-winning bird.