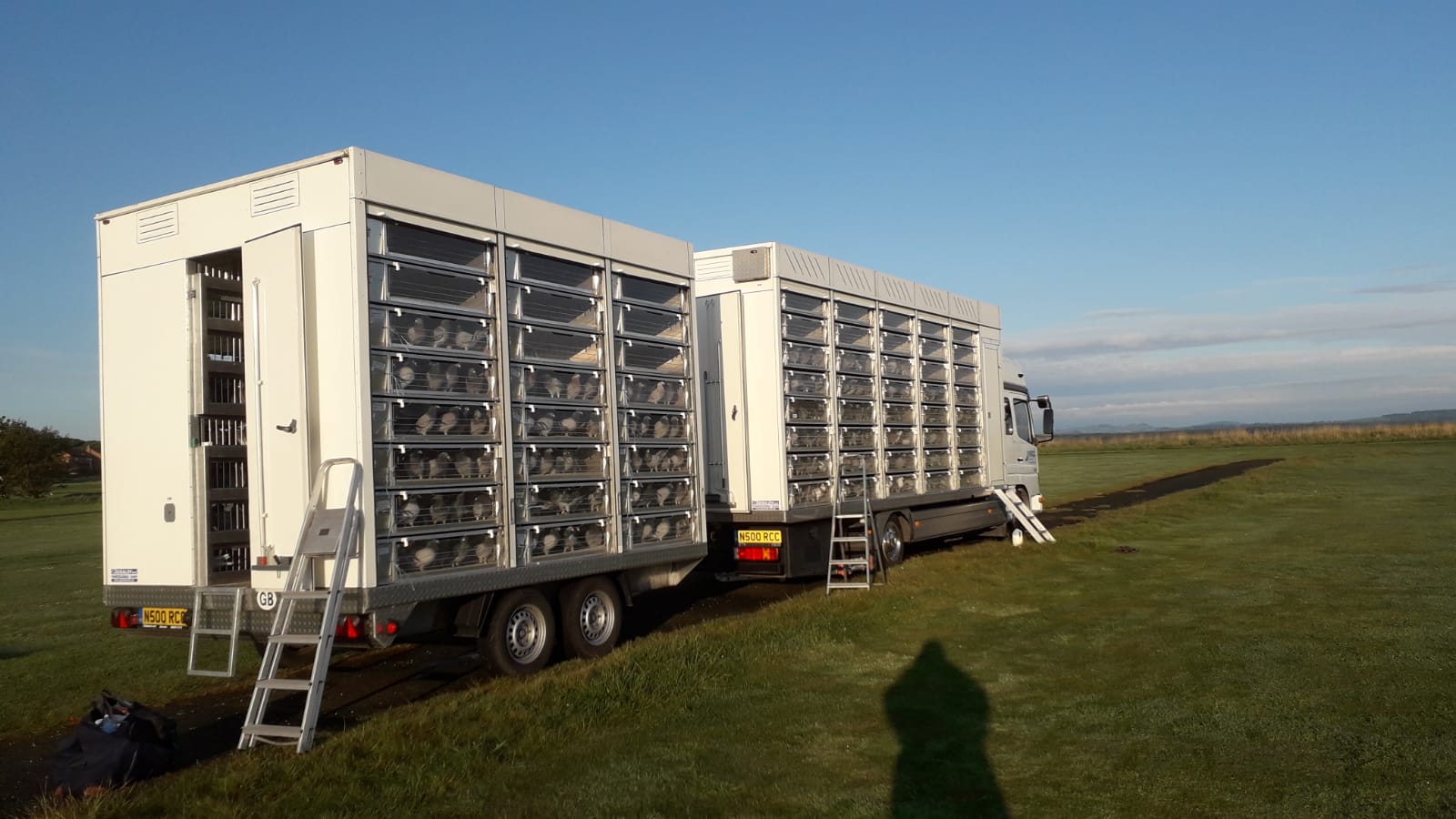 A dramatic week within the North Road Championship Club has seen elation at one loft ousted by disappointment, and frustration at another replaced by delight.

Provisional results of the season’s opening race from Dunbar had given victory to the Louth partnership of Dayton and Sayers, with Bob Boulton, of Addlethorpe, runner-up.

A re-calculation of the timings, however, has reversed the positions to give the win to 86-year-old Bob by probably the closest margin in the club’s 118-year and 325 race history  . . . nine-tenths of a second!

The newly-confirmed velocities are 1445.216 yards per minute compared to 1445.212. The nearest thing to a deadheat that can be imagined.

“It is disappointing,” admitted Pete, “especially as the results and report had been published, but it was still a good performance, and I can only hope the pigeon does well in the next race from Perth. Bob is a good fancier, and he beat us into second place when he won the Perth 2 old bird race last year. We are due to beat him next time.”

While delighted to have won his fourth open NRCC race, and to also have taken third open, Bob had sympathy for Pete. “I feel for him,” he said.

Despite a near-lifetime of pigeon racing, and achieving his fourth NRCC win, Bob is not taking the credit himself. He is sharing it with another three times open winner, Kevin Smith, of Chapel St Leonards.

They joined in partnership in the winter of 2018, when Kevin could not find a club to return to racing after a long absence from the sport.

Bob said that Kevin devoted a lot of time to the birds in the winter months, and in the build-up to the season but recently, also being involved in whippet racing and having a loft of birds at home, realised that he had taken on too much, and had to take a step back.

Since then Kevin has also suffered a nasty car accident and is out of action as a result of injuries suffered.

Nevertheless, he played a major role in setting the birds up for the new season, and Bob feels that he has benefited from Kevin’s work, after a slow start to the season.

Moreover, he has received welcome help from his own daughter Sue, and Kevin’s wife Barbara with training as he was unable to drive while waiting for a cataract operation. This has now been successfully completed.

So, despite a complicated preparation for the Dunbar race, the Boulton birds were up to the challenge, as they have been so often in the past.

He had two come together, and the first through the trap was a two-year-old blue widowhood cock bird, a Van Den Abeele bred by Paul Dawson, of the Flowers and Dawson partnership, of Spalding, and one of six birds sent for Bob to try out as youngsters.

The second – and third open – was another widowhood cock of Bob’s old breed, but bred by John Coles, of Kent, who has had pigeons from Addlethorpe over the years.

Bob, still racing as Mr and Mrs Boulton in acknowledgement of the role played by wife Phyllis who, unfortunately died last year, sent a team of 15 and had them all home on the day.

Of his previous NRCC champions, the Dunbar 2002 winner died of old age, the Thurso winner of 2013 fell victim to a predator in the loft, but now last year’s Perth 2 winner is joined by a pigeon that won this year’s Dunbar race by the narrowest of margins, no doubt to be christened Rocket 4 to follow the sequence of names given to the previous winners.

Bob is a down-to-earth, straight-talking fancier and says: “I am not in to all the paper work. All I do is prepare pigeons for races.”

But he always has a few tricks up his sleeve, and has enough stories to tell to entertain any audience willing to listen.

He recalls his early days in the sport thus:

“I should think I was about 12 or 13 years old when I started racing the pigeons with the Skegness club. A bloke used to come along after he had clocked his pigeons and wait for mine to time them in his clock. I couldn’t afford a clock.

“We had pigeons from here, there and everywhere, as long as they had a ring on. It was a long time before we started winning.

Skegness had a very strong club with some excellent fanciers. The NRCC young bird national has been won in Skegness several times.

I have been lucky enough to have a fair share of wins.

“I worked 52 and a half years with the intention of enjoying my retirement in racing my pigeons. There have been ups and downs, and the man has not been born yet who wins every race.

“When things don’t go right you have to analyse the situation, and try to put things right. Often you need to look no further than yourself for the reason the pigeons have not done as well as you expected.

“When everything goes right it is a very satisfying feeling. And there is no better feeling than winning a national race.”

Bob, of course, wins Section C which dominated the open result in the north west wind which developed en route after the birds had been released in a light south west wind. Eighteen of the first 20 open positions were occupied by birds flying into this section, including 4,5, 6 and 7 by Bob’s Alford clubmate, Darren Perry.

Roger Hallsworth, another outstanding NRCC competitor, interrupted the sequence by taking 8th open with his Section A winner, and the partnership of W and HE Attlesey took 12th open with the bird that won Section F.

Meanwhile, the Dayton and Sayers partnership, also in Section C, has sympathy from the fancy for being denied, by a whisker, the victory they thought they had won.

Unfortunately, their mood, and that of other Louth fanciers will not have been helped this week by the news that a record five baby peregrines have been hatched on their local church, no doubt destined to add to the carnage being created by the already large number operating in the area.

I could not help but feel the irony, and indeed the hypocrisy, when listening to the vicar of Louth jubilantly announcing this news on local radio and stressing the importance of the peregrines as a tourist attraction, how they were fascinating to watch when hunting, and how they brought  people into the church to watch their activities via specially erected cameras. Needless to say the predators are provided with a purpose-built  platform from which to launch their terror attacks. One must assume that there are no “Thou shalt not kill” sermons in this church!

Luckily pigeons competing in the NRCC Dunbar race pretty well escaped unscathed from this constant obstacle, and good returns were reported by the 1908 birds sent by 168 fanciers.

These were liberated by convoyer Darren Shepherd, and his assistant, driver Merv Greatrix, and here Darren gives his report:

for Merv and myself to start our  journey to Dunbar.

The journey went well and we arrived at Dunbar at 10.00pm. There was a low mist and fine drizzle which we had been driving through all the way from Alnwick.

We encountered a problem on arrival as the key we had would not open the lock. After several attempts we gave in and parked the lorry and trailer in a safe position in the corner of the car park.

We put the waters on for the birds at 10.30 pm and we bedded down for the night.

Waking bright and early at 5am we found Alan Atkinson, from the Hull North Road Federation, parked beside us. We explained about the problem with the key and thankfully the key Alan had opened the gate. Merv took the transporter and trailer to the point of release and we put the water back on and resettled the birds.

At this point the weather was still thick with mist and drizzle and a cool North East wind was blowing.

At 7am I spoke to our newly appointed weather advisor, Carl Upsall, who informed me that the weather looked rubbish for the whole day, and that he didn’t think there was a chance of a successful liberation. We agreed to speak again around 8.30 am to see if the weather had changed.

Merv and I set about checking with our regular contacts along the line of flight. I spoke with Graham Britton, who is part one of our weather team, following which I contacted Carl again and we were in agreement that with the weather, being so poor at the liberation point and there was not much chance of it changing during the day, it was best to call for a hold over.

Merv and I discussed the weather further and agreed the best thing to do was to contact Ian Bellamy and Ray Knight to inform them we were holding over. This call was made at 8.45 am.

The mist and rain stayed with us for most of the day but, a short break around 2pm, gave us the opportunity to start feeding and watering the birds which took us approximately two hours, after which Merv and I decide to put our feet up for a bit.

At 6pm both myself and Merv started booking our early morning call slots with our regular advisors and talking about the chances of a good liberation the next day. We were both receiving encouraging  feedback, but also heard that Federations who had liberated during the day had got poor returns. As we always want to give all of our flyers the best chance of getting their birds home safely, and not running into any adverse weather along the way  no matter how near or far they have to fly, we feel sure the holdover was the best decision, and we were surprised that North or South liberations had taken place that day.

The sky was beginning to break open at Dunbar, with blue sky and better visibility, and the wind was starting to move to the south west, and we knew if this continued we would have a very good chance of a liberation in the morning as we turned in for the night .

The rain came down again and it woke me at 4am on Sunday morning, but I opened the door to see a nice cleared sky, and   good visibility. The rain was still there but not heavy, more showery.

At 5.45am me and Merv both saw the sun starting to show itself. There was, by now, plenty of blue sky which raised a smile on our faces. We both said “looking good “.

At 6am I spoke with Carl who also confirmed it was looking good but, in his opinion, we needed to be away earlier rather than later as showers were likely after dinner and this may interfere with the further flying members

With the positive outlook we began to call our contacts and collate information. I spoke to Graham and had a chat with old badger Brian, and various others along the line of flight. Merv and I both agreed that I should contact Carl and, if he was in agreement, we would look to get the birds up between 7-7.30, which was agreed  with Carl.

So I joined Merv, who was already starting to prepare for liberation. With the strings cut and all checks carried out, Merv and I synchronised the liberation of the trailer and the lorry, releasing the birds into blue sky, sunshine and a light south west wind which turned north west en route. I rang Carl to inform him and the secretaries that the liberation was successful at 7am and that the birds cleared well .

The next time the convoying team will be in action will be at Perth on June 1st, marking on May 30th.