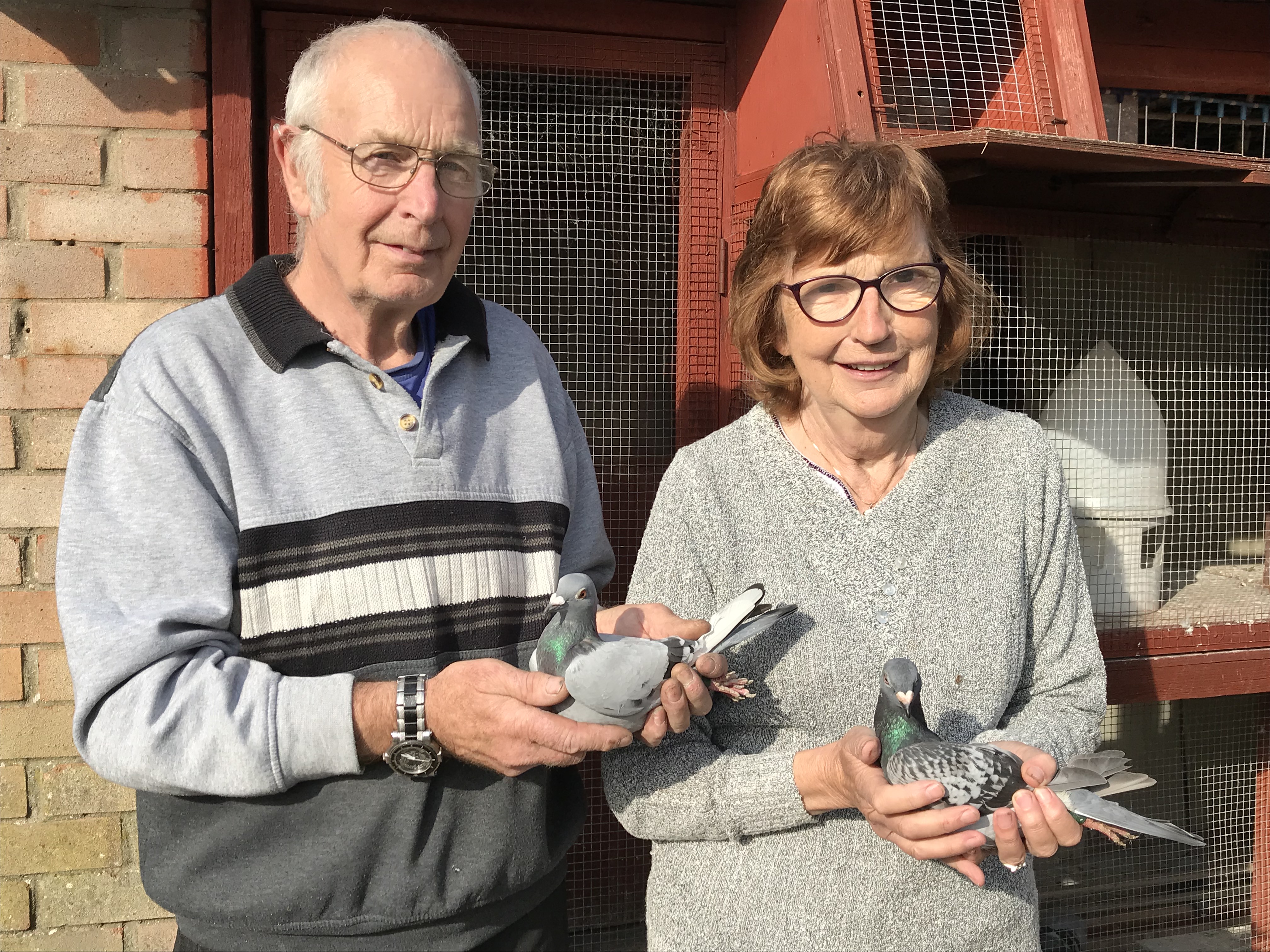 The North Road Championship Club’s final two races of the 2019 season were both won by the husband and wife partnership of Dave and Pat Evans, of Alford, where the Lincolnshire club had a great day as members took the first five positions in the provisional open result of the young bird national and the first two places in the old hens race.
In winning both races, Dave and Pat took their tally of open NRCC wins to six, in addition to countless section wins. They have now won the old hens race three times (2012, 2015 and 2019), and have won from Arbroath (2014) and Thurso (2016) in addition to this year’s young bird national.
They turned the tables on clubmates and good friends, Darren Perry and Les Gardner who were runners-up in both races, having beaten the Evans into second place in both races the previous year.
Indeed this year’s triumph for Dave and Pat was especially sweet because they had been runners-up in the young bird race on five previous occasions.
The breakthrough came thanks to the efforts of a chequer cock bird, paired to an old hen, and sent feeding two ten-day-old babies which have now, typical of the generosity of Dave, been given to a new starter in the sport.
After an 8-45am liberation into a strong south-west wind, the winner was timed at 13-27pm to record a velocity of 1213.702ypm over a distance of 194 miles 844 yards.
Nearby, the Perry and Gardner partnership was also timing in at 13-27, but their bird was flying 368 yards less than the winner and so occupied second position on a velocity of 1212.468.
Not far behind were clubmates veteran Bob Boulton on 1208 in third place, Brian Sears, recently returned to the area, on 1205, and Martin Sharp on 1202. All are previous open winners, which just goes to show the quality of fanciers competing in the strong Alford club.
Dave was particularly pleased with the win because he said they had not had a very good young bird season and he had only just managed to get the birds in form ready for the national. They had been hit by young bird sickness earlier in the season, and had also suffered the loss of 26 birds (some of which have been working their way back) in one race.
The young bird winner had been to quite a number of races and was obviously motivated by the youngsters he was feeding.
A few extra training tosses were introduced in the approach to the race.

The winner is bred down from birds obtained off their friend in Belgium, Guy Eveart, from whom they have had six youngsters for many seasons. Invariably they have been successful, and this year birds taken to Belgium by Dave have also been successful for Guy.
Winner of the old hens race was a blue w/f yearling bred from a previous winner of the race and a Wily Thas cock bird from the late, great Frank Tasker.
Dave paid a sincere tribute to Frank, not only as a mentor to him, but for the unpublicised help he had given to many members which had resulted in the legacy of such a strong, competitive club at Alford.
“Yes, we are in a good position for many races,” he said. “but you have to work hard to win the club let alone the NRCC.”
Dave will be 74 next month and, for a little while, will be older than Pat, but they will not need a birthday to prompt a celebration. They have good reason to celebrate after this excellent double in the NRCC.
It may say something for their birds, and their preparation, that five of their open wins in the NRCC have never been on easy days, with velocities in the 1200s and 1100s in all races showing that their winners have had to work for their honours. The win from Thurso was on a velocity of 1539.
All this success has put Dave and Pat firmly placed among the NRCC all-time greats.
Race secretary, Ian Bellamy, summed up the final races as follows: “Another year done and dusted and a good end to the season for the NRCC.
“A nice steady race with all sections timing in on the day with congratulations to Pat and Dave Evans of Alford for winning both the Young Bird and Old Hens events.
“With most fanciers experiencing heavy young bird losses this year, it was pleasing to have an entry of 1205 young birds sent by 100 members which is on a par with last year’s race.
“The Old Hens race attracted 133 birds which again is consistent with last year’s entry giving a total NRCC convoy of 1338 pigeons.”